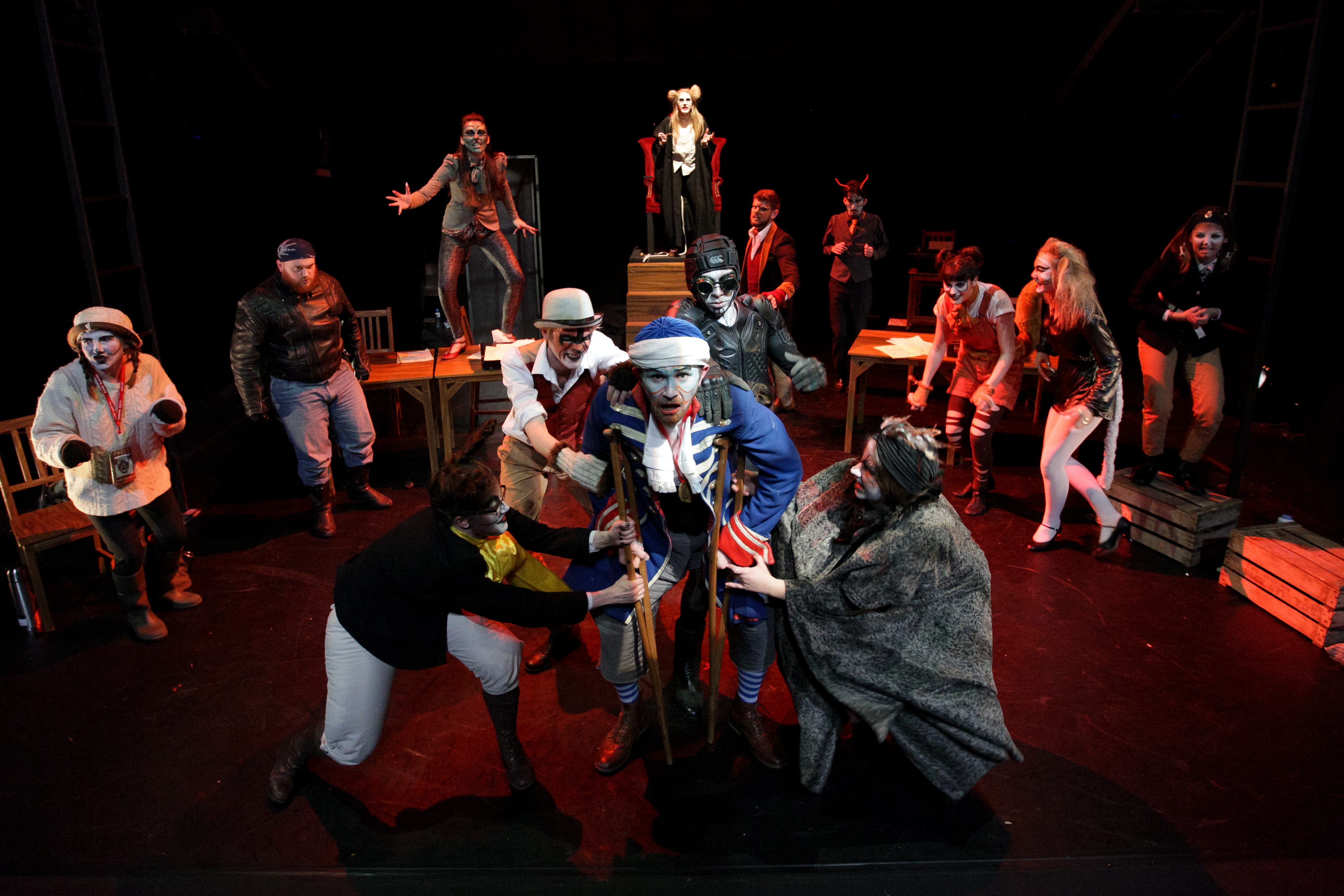 Get the Hell out of my House!

Frank is dead. She cannot be seen, heard or felt by the living. She quickly becomes suitably frustrated as a couple move into her home!
Before she can even try and shift these new arrivals, her neighbours are dying all over the place and joining her in the silent world of the dead. They all swiftly become entrapped in a plot of murder, mystery and madness.

The concept behind this supernatural comedy was inspired by the 2014 East 15 Devising Festival, where it existed as a 20 minute script with five characters. The initial script never went into production, but a year later it’s finally emerged as a full piece with ten characters.
Rehearsed Readings are a great way to see a play in action in a short period of time. This process provides feedback on the play as a whole. Similarly it provides inspiration on developing the characters and gives me ideas for what to do next with the play.
It also gives the rare opportunity to work with a fully-trained ensemble of actors and gage their interest to see if they wish to work on the project in the future.
Starring: David Archer, Grace Battram, Natalie Bradbury, Alex Geoffrey, Adam Hughes, Beth Johnston, Anna Krost, Louise Nicholls and Majinko Szabo

Get the Hell out of my House! – Milkman Scene

‘Wingless’ is based on themes of xenophobia and bullying that we are all familiar with, but portrays them through pun-filled comedy, vivid dialogue and it’s own unique supernatural context.

What begins as a seemingly simple meeting between an Accountant called Bert and his employer Mrs Windle becomes a fierce debate on ethics, faith and humanity.
Bert is exceptional at his job, however the only massive issue is that he has wings. His twelve-foot wingspan instantly proves difficult as he has tried to adapt to his confined and judgemental surroundings. His existence challenges his colleagues beliefs and patience as they work alongside him and soon this frustration finally comes to head in an inevitable conflict between the human employer and her angelic employee

Two acquaintances at a party watch the horrific film ‘Planet Terror’! Lucas is disgusted by all the horror, meanwhile Eve loves every single second of it. Lucas notices a long tube running up into Eve’s nose, and so, he does his best to ask what it is for…

(An account of my feelings of passing an early script onto a Director and Cast can be found in the blog below.)

BA (Hons) World Performance was split into three groups to create 30 minute pieces each. They were each given their own budget and left to their own devices to create theatre.
When the last surviving Dodo, Raphus Cuccullatus, is injured in a road collision with a moterbike, the animal court are made aware of the tangible threat of the extinction of the species…

(Want to learn more about the process behind ‘Worst Case Scenario’? Check the blog below!)

What’s the worst that could happen

Four mutual friends decide to sleep in the darkest part of the forest.
Relationships strain and break as the darkness confuses and consumes each of them. As violence begins to ensue, accusations fly, tensions rise and lives are taken.

(Want to learn more about the process behind Opaque? The entire play was set as theatre-in-the-round and in perpetual blackout. Did that catch your attention? Check the blog below!)

Acting in Darkness
Scroll Up