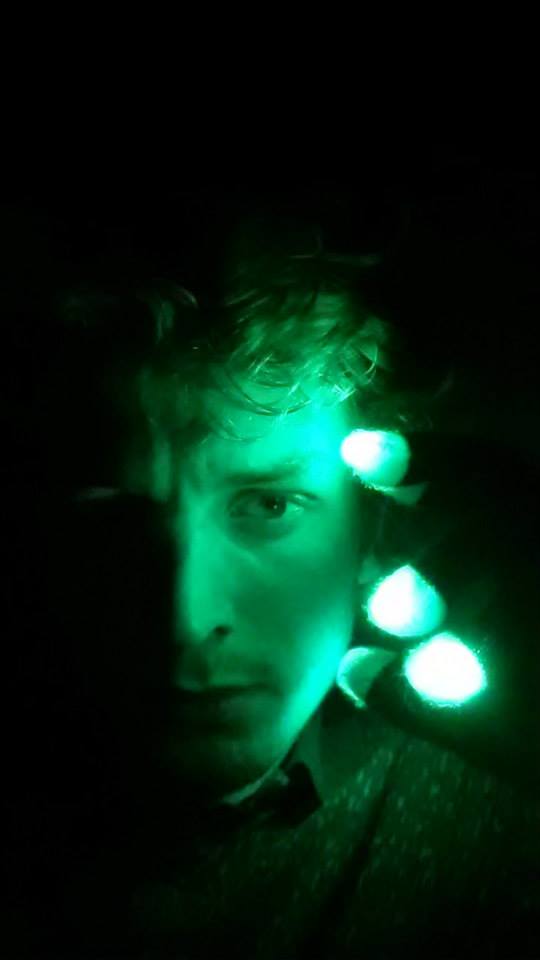 An insight into the process behind Opaque.
A 40 minute play set in-the-round in permanent blackout.

Entire plays are often born from the simplest exploration. As actors, and human beings, we depend on our senses every single day. Sight. Hearing. Taste. Smell. And, yes, touch, which comes in many varying forms including: skin-to-object-contact, temperature, balance and also proprioception, which is where we understand how our bodies are positioned in space.
So, what happens when we deprive ourselves of our primary sense of sight?
If you’ve read far too many comic books as I have, then you will completely agree that it heightens all your other senses and instantly turns you into Matt Murdock, the Daredevil of the Marvel Universe! However in theatre (and reality), without our sight we instead attempt to adapt to our new restricted body, the other people and the world with the rest of our senses that are still active. As a result, we become much more aware of all the other functions of otherwise restricted body.
Through ‘darkness workshops’ it became clear how quickly we react with fear once we lose our sight. By turning off the lights, I was able to recognise how each individual reacts. The loss of sight makes us defenceless and vulnerable. We seek comfort in sound or touch or even by being within proximity of others. When we are deprived of such securities we have a tendency to panic and either rush across the room or curl over to protect ourselves, much like a gazelle would when attacked by a lion. This is fight or flight in a real environment. When vulnerable, do we run or do we hide from danger?
So the next logical/mad step was to harness this raw conflicting fear and put it on stage, by producing my first horror script inspired by these ‘darkness workshops’.
Now I’ve never been a large fan of horror. I find ‘jump-scares’ to be cheap thrills, stimulating a reaction from an audience by screaming in their face. Meanwhile, real and great horror is produced through atmosphere and tension, which is what I aimed to have a crack at.
(See the infamous ‘Woman in Black’ on stage, where 2/3 actors take you on a dimly-lit horror-filled journey. Or watch the film ‘Sinister’ that harnesses the idea of having to look at an image twice, as there was something you missed the first time… Or even the recent ‘Babadook’, where a malevolent book torments a disturbed mother and her child.)
The set up for Opaque was rather simple and familiar to any who know the horror genre. Four young adults are camping out in the darkest part of the woods. Armed only with their torches, which are slowly disappearing one-by-one, they determine the truth behind what is really lurking in the darkness. But, wait, why on earth would they sleep out anyway!? Well… that’s what we get to find out, and, yes, it also allows the darkness concept to take place.
Shortly into the process, once I had my four actors (the esteemed Stefan Gackowski, Christian Anstee, Amelia Blackwell and Anna Krost) I realised the next insane thing to do would be to put the concept in-the-round with three exits.

So now we have a play, in a circle surrounded by a forty plus audience, in blackout, with props, oh and the actors who would be fighting later on.
Insanity? I’d rather called it ambition. Ambitious madness that if done wrong could get somebody hurt.
The only way it would work safely was with a lot of rehearsed precision, safety measures at every step and some small hidden choreography here and there. We quickly invited a fight choreographer to several rehearsals (Victor Stole) and were swiftly told that we would have to do contact punches as there is no hiding from an audience in-the-round (even in the half-light!) All the slaps and punches to the gut became totally real. However when the first fight sequence arrived we decided to try something a little sly, but much, much safer than a full-choreographed fight in the pitch dark.
The two guys are mid-argument when all the lights vanish. They both start to panic and conflict. In the dark, the two actors approach one another. They know the exact number of steps they need to take. They link arms and simply sway back and forth, creating a tremendous amount of noise with their feet, whilst not moving beyond the centre of the stage.
It became a truly terrifying experience to be in that front row.
A later fight sequence between the two girls had to be rehearsed to a fine point, as there were strobe lights flashing (providing enough light to act) and a large rock to the side that could be very easy to lose track of if they became disorientated.
Another difficultly arose with the atmospheric music playing throughout. As actors entered and exited they exchanged turns playing music. They’d have to find a bass guitar, cajon and cello in the complete darkness, arm themselves and play perfectly as though they were blind. The only way it could be done was with practice and rehearsal and more practice until the music would became buried in their heads and their fingers twitched as they attempted to sleep at night.
All in all, I became quite inspired by the determination of the four actors as they made their way to opening night. Frustration was clear at some points, but we all got on very well and the process became personally painless. The end result was slick and rewarding, well worth every minute of rehearsal time. Sure it wasn’t perfect, but nothing ever is in theatre! That is the beauty of it. Anything can happen, especially under the conditions of the darkness concept. Besides, I personally love live performances that takes that risk to be something unheard of. I think we managed to create something off the wall that was still rooted in the horror genre (minus the dreadful jump-scares that haunt the genre.)
Although… nothing quite prepared us how dark it would be on that opening night. It was as though the lack of light itself was taunting us for attempting to create a play in it’s presence. We fought through, proving that you can act in the dark. Now, a year later, as the next Devising Festival for the second year of BA (Hons) World Performance has begun, I still can’t get moments of Opaque out of my head.