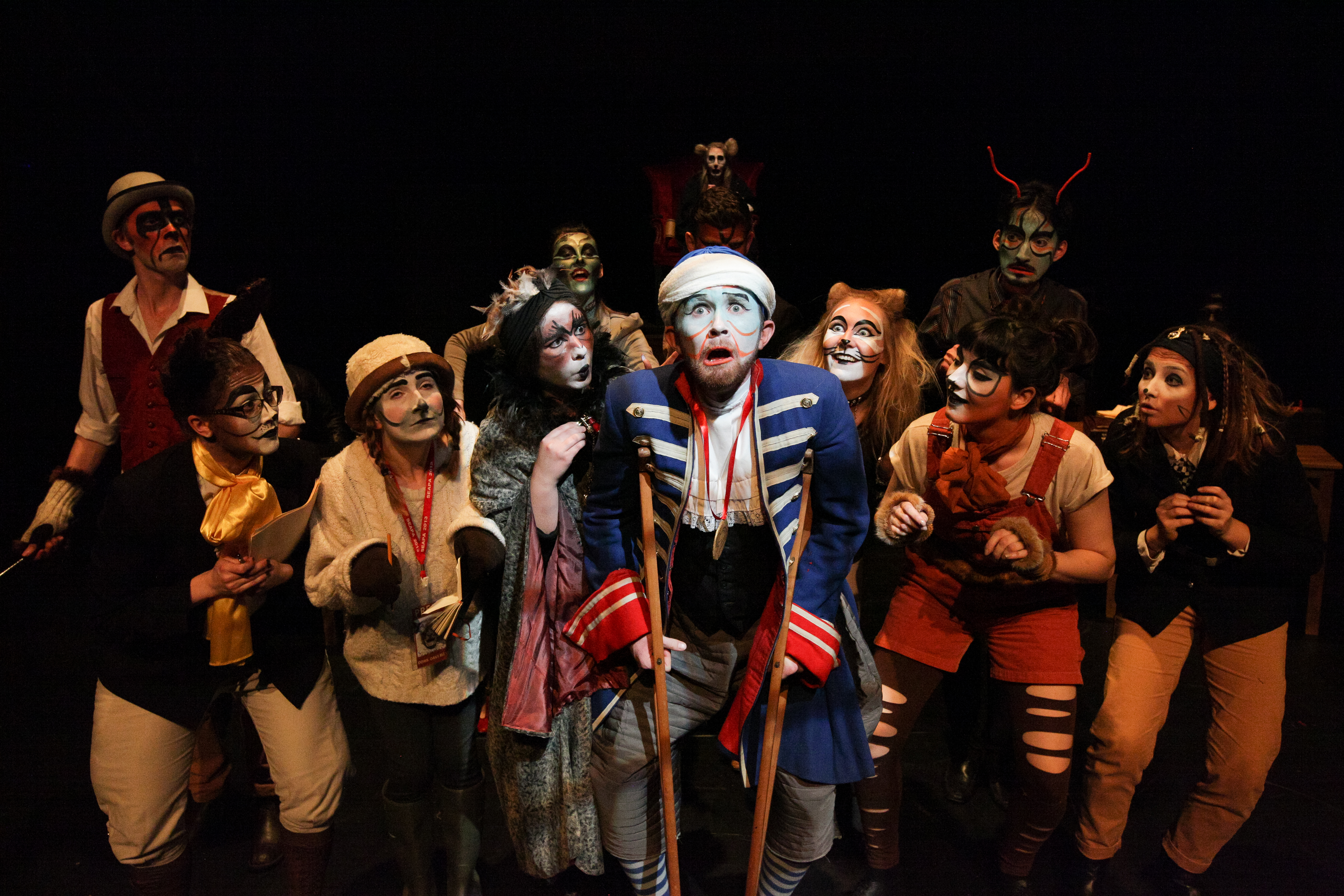 In 2015 BA (Hons) World Performance was split into three groups to create 30 minute pieces each. They were each given their own budget and left to their own devices to create theatre. This resulted in the percussive Chronos with a puppet God that filled the stage, the surreal Imaginaria with twisting visuals, movement and peculiar characters and finally Worst Case Scenario. A play where animals, machines and human pontificate over who ran over the last remaining Dodo!
Our group divided the many responsibilities between ourselves. Myself and Jessica Cottee were designated to take charge of writing, whilst marketing, set, costume, props and music was split among the 13 strong group. What followed was, somehow, the smoothest devising and production process I have ever (and will probably ever) have in my time in the performing arts industry.
So why the hell was this such smooth sailing?
Training and persistence! That’s my answer. By this point we’d devised shows with casts of 20 and 40! A group of 13 was a dream come true. We’d sung and danced and read scripts and followed directors. We were ready and craving to create our own theatre. This is what our training had been for.
Devising is never plain sailing. The other group hit obstacles and our road was full of bumps too. We argued and deliberated and took, by far, the longest time to decide what we were going to do. Weeks longer than the other groups.
It came down to 3 choices.
The Lost Sock – A sock goes missing in the wash. The rest of the laundry basket begin an epic journey to find their brethren. (This had my vote and still does!)
The Insect Migration – I’m making up the names now. But basically a group of Nits have to leave someone’s head. It involves transforming the perspective of the stage as the audience watch micro-organisms fight for survival. We’d create our own culture and physicality and language!
Highway Pizza – An Australian term designated to road kill. In this concept… animals would go to court and figure out who did it. (Spoiler Alert! This one may have won…)
As you can see… we had vivid imaginations and someone (probably Bill) had slipped too much ecstasy into our tea. I’m joking. We didn’t do drugs. We got drunk off our imaginations. I disgust myself. I should delete that sentence but I won’t because I enjoy the nature of this rant and that one day, someone, will read it and I can say HAH I made you read the word HAH and they will hate me even more. You’re welcome.
We were split between socks and nitts, a disgusting ordeal involving deliberating conversation, and a great intervention occurred as Pizza was sold to all of us unanimously. It was magnificent, I don’t remember any of it. It was so freaking mind-blowing. I can’t remember who did the speech or what they said but we were all on board with HIGHWAY PIZZA… YES PIZZA PLAY! Probably needs a new name… now known as WORST CASE SCENARIO! Why? Well… Because we asked the administrator. She had a little list and asked what name she liked the most and we obey and respect her opinion. Tess is brilliant and magnificent and talented and more people should tell her this. You. Reading this. Message Tess and say she’s great. Thanks. If you don’t know her, stop what you doing right now and ask someone who Tess is. (Preferably someone from East 15) You are welcome.
Me and Jess got to work as the group found their animals that they would work with. We found roles within the court and worked through workshops to fit the animals for each role. A tiny mouse Judge, Prosecutors Fox and Lizard, a frenetic Rabbit assistant lawyer, Hedgehog/Cat/Squirrel Witnesses, Weasel Security (that was me!), Doris the Sheep from the Daily Bleat (my personal favourite), Dodo Victim and Defendants (We had the bike and man (Who’s to blame! Man or Machine? (Who knows! (so many brackets))) and a clock. She was an owl. Called Olga. Just cause I like alliteration.
With animals designated, our main role as writers was to organise an initial structure for the narrative. We looked into court structure for cases involving road collision and simplified it all because we only had 30 minutes for a show! Next up we would record and transcribe dialogue from various improvisations over the early weeks. See how characters interacted. How did they relate to each other. How did the food chain come into play. Finally we wrote the script using the discovered structure and recorded dialogue. After passing this script onto the actors they would adapt their own dialogue to fit their character.
We put in AS MANY PUNS as possible. I love puns. They are my bread and butter, if I could eat words. And the actors found what worked and what didn’t and the writers made sure we let them erase anything they didn’t like.
Through this process I’ve learnt that writing has to be flexible, malleable and easy for the actors to access the material and adapt it accordingly. We had to step back as writers. It would only interfere with the creative process and force syllables down the actors throats!

I found that it had been the best use of my writing skills at East 15. More so than the writing classes. That’s another story… but I learnt so much from my writing partner Jess. I have a tendency to write too much and not always consider how elaborating on one point will affect the plot later on. Much like this blog. WHERE ARE YOU, JESS?! I NEED YOU TO EDIT THIS THING!
Jess taught me when to to stop writing and look at the big picture. And so, I guess, I will go back and edit this beautiful monstrosity. [Remember to thanks Jess for her endless patience as she listened to your endless rambling and attempted comedy. INSERT PUNS HERE!]
Also, most importantly, I’ve learnt to work as part of a team through writing, when I am so used to working on my own when creating text. At this point in my career, I adored writing my books. I still do, but I was obsessed back then. I would spend hours creating new chapters and even looooonger editing and refining my work. It’s ridiculously addictive. So, somehow, working in writing collaboration for ‘Worst Case Scenario’ had proven extremely effective, which was a lovely surprise.
Needless to say… it went so well that we toured it. Whilst travelling Italy, I wrote more material to expand the piece to 45 minutes and Jess edited it all in swift savage response. We recast and regendered and redeveloped as the initial cast’s availability changed over time. We’d all drifted apart but our love for the work quickly carried across to Ed, Emma and Beth and they helped us resuscitate our play and drag it off the side of the road. I loved being back at East 15 and I adored the new work we created and I look fondly on it all now. Hence the blog.
We take time and company for granted. God, I finish I could rewind and relive those years. Colleagues and friends living minutes away. Magic work being created daily. We had something so good in that final project. We struck gold and we hadn’t even graduated. I knew from that, whatever this crazy bunch did next, I’d always have their back… and hopefully they have mine!
Hey guys? Want to do Worst Case again? I’m good to go 😀